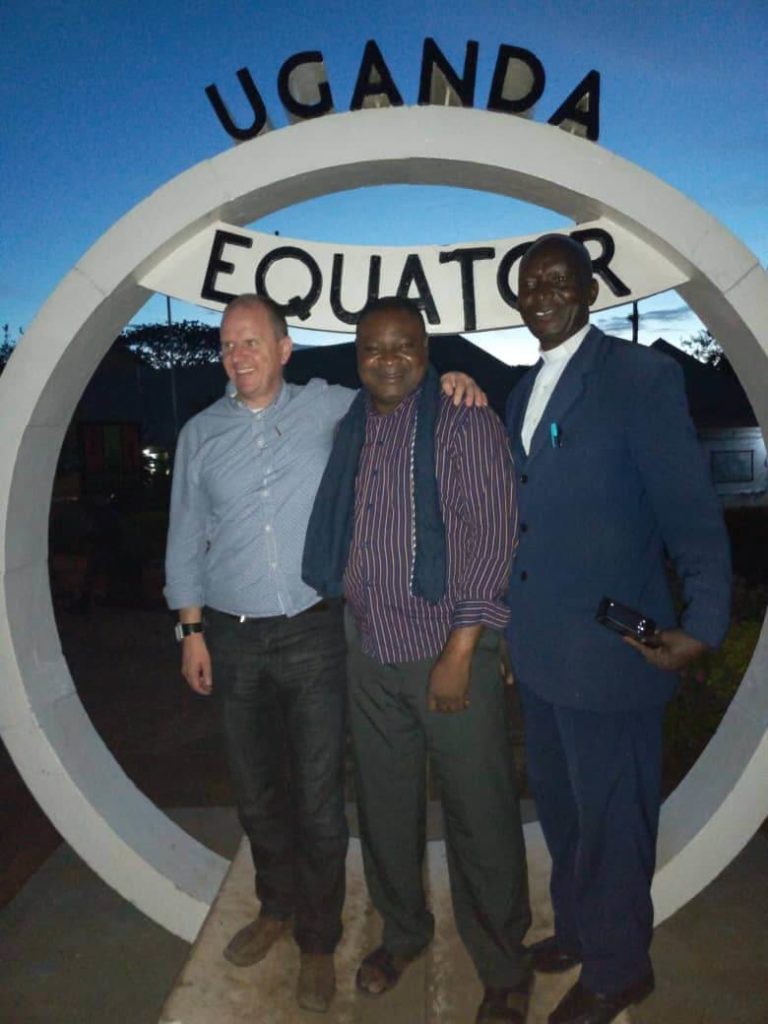 One of our pastors Graham Nicholls attended the annual conference of World Shine Ministries in Southern Uganda near the border with Rwanda Here’s his report and some reflections.

Uganda has had a troubled history since gaining independence from the British in 1962 with civil wars and fighting with some of its neighbours. The current President has been in power since 1986.

Although it is a relatively safe and peaceful country with some good things happening, there is general agreement amongst people you speak with that it is not really a functioning democracy and there is some corruption at all levels within the police and in government. Also, historic tribal connections can add an extra layer of problems.

I spent a short time in the capital city, Kampala, which has some relatively modern buildings and shopping malls alongside much older ones from the colonial period and very basic shops and small dwelling places.

There are some tarmac or concrete roads but most secondary roads are maintained with the volcanic red gravel and have sizeable cracks and potholes to navigate.

In cities like this there are boda boda taxi motorcycles everywhere with the eager drivers gathering in groups at road junctions, looking slightly intimidating or bravely weaving in and out of the traffic with their passengers. Like most of the people I saw here the taxi riders are so young – or maybe I am just getting old.

There are makeshift markets everywhere in the city at roadsides, selling fruit and vegetables and charcoal for cooking. Notice the cows. Excellent!

I then travelled with some other preachers to Rwentobo in the South West. The journey took about 8 hours and allowed us to take in the urban, rural and village sights including fast food street sellers in many villages offering hot sweet bananas and roast chicken on sticks. The main roads here were really well maintained with substantial speed bumps in every town and village we passed through. The rules of engagement on the roads were different from the UK with cars and motorcycles passing close by each other and overtaking through small gaps which required precise timing but I never once felt unsafe.

Here is a fairly typical village streetscape with shops and houses which to us might seem rather basic but they mostly sell the same items as we would purchase here. There is an excellent mobile phone network with fast internet even in these rural areas and a lot of people use mobile phones for paying for things and transferring money to others.

Around the shops and outside people’s houses there are animals of various sizes – mostly cows, goats and chicken which graze at the side of the road. Some of them are tethered. The more well-off farmers may have a small herd of animals with someone looking after them. There are almost no fences and few hedges so they can roam freely. Everywhere there are cars and motorbikes being worked on at the side of the road.

The conference was taking place in the grounds of Rwentobo Foundation School set up by World Shine. This is a hilly rural area with banana plantations all around. We were about 6,000 ft above sea level and you did notice it when you did any exercise!

I think every day I ate bananas in some form – mostly the savoury ones – green bananas cooked and served whole in a stew or mashed like potatoes.

The main purpose for me being there was to preach at their annual conference and get to know the scene there a bit better.

The conference was from Wednesday to Sunday with a full programme from dawn until late at night which consisted of preaching interspersed with singing and dancing to Christian songs. It was inter-denominational but I believe the majority were Anglicans. I think it would be fair to say that most of the preachers and congregation would be more of a Pentecostal persuasion which showed in the style and content of the preaching. The preaching was sometimes explanation of the ideas from a text but could also be times of personal testimony (many of which were very challenging) or a time of healing and deliverance. Some of those times were intense and it was not easy to determine if what was happening was a genuine work of God – but in this context it was not for me to judge but trust that God would bring the truth to light. There were passionate prayers for God to be at work as well as clear explanations of forgiveness through the finished work of Christ and repentance – with very practical and direct applications.

It is hard to be precise but I think each day there were around 5,000 people there including a few hundred pastors, mostly from Uganda but also from South Africa, Tanzania and Kenya. There were supposed to be a group from Rwanda but crossing the border is not possible for them at the moment due to a dispute.

The first day I preached from Galatians about sonship. The programme ran late (as it did every day), so I ended up preaching a couple of hours after the scheduled time which was actually a benefit because the low sun was shining directly on to the stage and was slightly less strong by then!

I think God helped me to be clear and appropriate. I was not like the other preachers but I think it was well received. God knows what he was doing.

It was the rainy season and there were some major downpours including the second day I was there. After a prolonged session of singing and dancing in the rain until it eased off, I was called up and preached from Revelation 2: the letter to the church in Ephesus. I spoke about the fact that Jesus knows all about our work for him, but the danger is that we have lost the love we had at first. I had an excellent translator who really seemed to be taking the ideas and communicating with great enthusiasm, not just doing word for word.

On the final evening I preached from Revelation 21 about the new heavens and the new earth. I was seeking to encourage people with the vision John is given of the final state of blessing in the presence of God but also the curse for those who don’t believe. There is victory now and the presence of God with us through the Holy Spirit but our salvation is not complete yet. There is a danger of giving hope that the victorious life of the Christian will mean paradise on earth. There is indeed great blessings now but these are only a foretaste of the life to come which will be so much better.

After I spoke, Medad Birungi, my host, came to the stage and appealed for people to come forward to pray prayers of repentance and commitment and many did. It is not our usual practice to do an “altar call” but it seemed appropriate and about 200 came forward. I trust by God’s grace there were those who were committing their lives to Christ for the first time. I think these calls were also times for people to express repentance for sin and backsliding.

I then asked if I could pray for the church in Uganda and Medad called everyone forward – a vast crowd. It was a very humbling experience as I prayed for God’s blessing on the churches there and on the country still scarred by many wars. In a way it was rather presumptuous of me to be leading this congregation in a prayer for a country and that I had just arrived in for the very first time but it wasn’t about my competence but the great need that I felt for this country to know God’s mercy and blessing in so many ways.

There is great enthusiasm for Christ, a real sense of the reality of God in everyday life, a desire to turn away from sinful idolatrous lifestyles including bigamy and witchcraft and the damage caused by participation in so many wars. There are many things to commend and some to challenge us, but above all a need for their faith to be grounded in God’s word. Maybe we can play our part in that.

On Saturday morning I went to “Voice of Kegezi” studios in Kabale and was able to do a 30 minute sermon on Hosea 1 – the depth of our sin and God’s extravagant love. I was told to preach evangelistically and end with a strong appeal to commit to Christ which I did. This secular station broadcasts over a wide area including some of Rwanda. I have since been told there are at least 7 million listeners to that station. We pray that it might have been used by the Lord in some way.

Many of the children and young adults who attend the school do not have shoes and we were able to take about 30Kg of shoes with us collected by the church here for which they were extremely grateful.

Things to pray about

Give thanks for a safe trip and for the opportunity to preach the gospel, have fellowship with many Christian brothers and sisters and to experience a very different culture and to learn from them.

Pray for fruit from the preaching and discussion and for wisdom about how to develop this relationship in the future.

Pray for the country of Uganda and the continent of Africa – there is so much to be thankful for in the numbers of people identifying as Christians and many opportunities to preach the gospel.