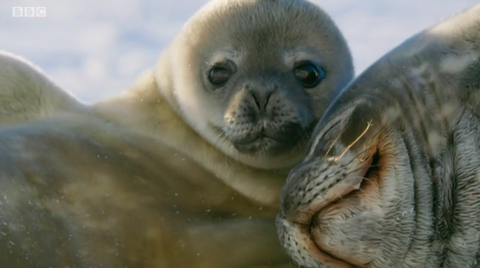 David Attenborough returned to our screens at the end of October with a new natural history series, Seven Worlds, One Planet. Just when you think you’ve seen it all in these kind of programmes, along comes another epic televisual experience giving us a window into awe-inspiring landscapes and vegetation and remarkable animals, great and small.

After narrating the birth of the seven modern-day continents from one land mass referred to as Pangea (which could just have well been the Noah flood story) Attenborough comments on how we are going to witness “extraordinary and wonderful diversity”.

Episode 1 focusses on Antarctica. There are a number of great scenes but particularly fascinating to me was a gentoo penguin being pursued by four killer whales. Despite valiant attempts to evade them with its twists and turns it can’t outpace them and is eaten. Nature is so environmentally unfriendly. What is most remarkable to me is how Attenborough breathlessly describes the intricate complexities of life on earth with almost religious reverence but without even a nod to the possibility of a designer.

The programme begins by saying that this may be the most critical moment for life on earth since the continents formed. And then about every 10 mins through the programme there is a solemn warning about climate change along the lines that it could wipe out whole species and change the continent and perhaps the world forever. Maybe there will be just a few humans left fighting over the last habitable areas and dwindling food stocks.

The episode ends with a cameramen crying at the potential loss of the penguin colony he is filming due to climate change.

Do any of the animals ever worry or feel responsibility for the environmental damage they cause? None of them, from the penguin-eating whales to the sea urchins capturing beautiful jelly fish, have a conscience. And why should climate change matter to Sir David Attenborough? After all, he is a convinced evolutionist and thus just another mammal. If there are no more habitats for penguins to waddle around in, isn’t that just natural selection working its magic. Why should he want to interfere? What is the philosophical basis for wanting there to be giant whales for our children to marvel at?

The inconvenient truth is that there is this strong feeling imprinted on us that we really ought to care, and a sense of duty that we ought to take care of our world. Isn’t that because God has given us a mandate to subdue and fill the earth but at the same time to be responsible rulers (Genesis 1)?

The most depressing thing to notice from all of Attenborough’s commentary is the hopelessness of living in a world controlled by chance and accident. We cling on to the thought that we might be able to find solutions to environmental problems. We whistle a tune and desperately hope we don’t blow ourselves up or turn the earth’s resources into a desert, but it is only vague optimism.

But what if you knew that there really is a better world to look forward to, a place that is beautiful, fascinating and awe-inspiring, where everything that could spoil it is absent? What if there is such a place, one so extensive, rich and diverse that the BBC could never produce a series sufficiently epic to do it justice?

Now that would be something to look forward to.

That is the hope given by the good news about Jesus Christ: certainty in an unpredictable world.