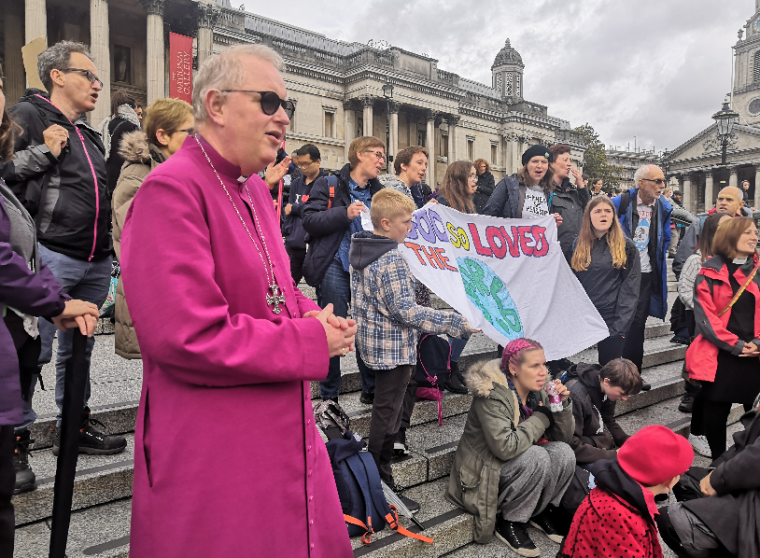 The Extinction Rebellion climate protesters in London have been joined by many professing Christians, including some clergy who have carried out baptisms, got themselves arrested, and generally shown solidarity with the activists and claimed God’s blessing on their actions.

The Bishop of Colchester, Roger Morris, joined people in prayer and worship, led protesters in a Eucharist and said, ‘When our very existence is threatened by our insatiable exploitation of this precious earth, we have to speak up and we have to take action.’

One of the people being baptised was Holly-Anna Petersen, a member of Christian Climate Action who said that she wanted to reaffirm her vows at the protest as a public ‘outworking of her faith’. She said:

‘Being here, making a stand for God’s creation, is part of my worship. Jesus was the ultimate rebel, whose bravery in speaking out against injustice led not only to his arrest, but his death. Being here on the streets, sharing community and standing up to oppressive powers, feels very much like the early church.’

Does this description of the early church stack up? Those first Christians faced genuinely oppressive powers. Do you think Emperor Nero would have tolerated giant effigies of himself being paraded around the streets of Rome? I don’t think so.

Secondly, the early church did not ‘stand up’ to the oppressive powers of their day (who were doing far worse things than environmental damage) by organising mass protests. No, they submitted to the authorities and got on with telling people about Jesus. They only rebelled when the state directly prohibited obedience to God, especially when it came to preaching the gospel.

But leaving aside the poor theology and church history, is there something we as Christians ought to be doing? Climate change is without doubt a very serious issue. It is not sufficient for us to simply hide behind the promise God gave Noah after the flood – that he would never again allow catastrophic environmental events as long ‘as the earth endures’ (Gen 8:22). Our world might still be just about habitable even after we have perpetrated vast amounts of damage but in doing so we would not be keeping God’s command to take care of the planet.

So, each of us should adopt ways in which we express our personal desire to be good stewards of the earth and, as much as we can understand the issues, make representations to government and to companies about what we believe they should be doing, and make changes to our own habits where we can. The questions about what the solutions to our climate crisis should be are complex, both economically and scientifically, but that should not put us off trying to work them out. And we certainly should not be encouraging irresponsible consumerism.

So how should we conduct ourselves on this issue? Should we throw in our lot with the anti-capitalist protesters? Should we chain ourselves to a piece of public property to cause maximum disruption or glue ourselves to some cursed form of transport. Are capitalism and corporations all evil at their root?

The current protests have a kind of religious dimension – there is the threat of imminent judgement (extinction) unless we repent, and salvation is promised if we all live differently in order to rescue the planet. But it’s not Christian it’s practically pagan.

Christians need to make sure that we don’t get caught up in this new-age, quasi-religious fervour and start confusing it with the gospel. Salvation does not come through being carbon neutral; we will never be green enough to face a holy God. We might have common cause with other religions in seeking to protect the environment but our biblical faith is not the same as theirs and we certainly do not consider ‘mother earth’ to be sacred, as some Christian groups have been suggesting.

We also need to consider the mode of current protests and whether they really fit with New Testament teaching on respect for those in authority.

And even if you decide that protesting in this way is permissible, what about protesting about other atrocities? Our twenty-six voting bishops recently absented themselves from the House of Lord’s vote to impose abortion on Northern Ireland. None of them seems to be standing up against false religion and heresy, or for the right to take an assembly in a Church of England school and state that Christ is the only way to God. I see none of these climate-protesting Christian leaders being arrested for refusing to pander to the current totalitarian calls for recognising and encouraging ‘transgender and non-binary’ children to mutilate their bodies and mess up their minds.

Our greatest priority in these days of crisis is to pray for our broken world, one in which so many are unprepared for the greatest challenge the world has ever faced – the return of Jesus Christ. It is an event that will lead to something far worse than environmental extinction for those who persist in rebelling against God’s good word. Let us make sure our warnings about this are heard loudest and longest.