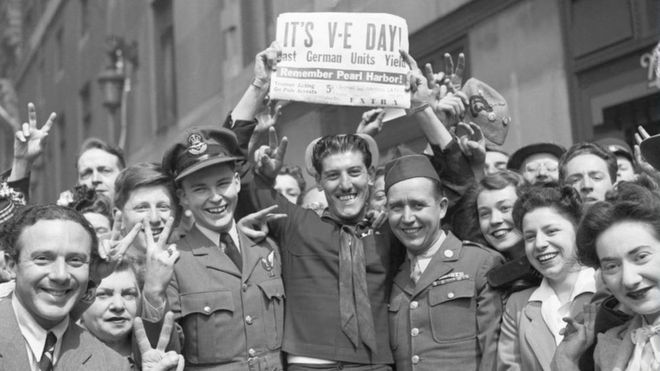 V-E Day marks the end of hostilities with Nazi Germany after they formerly surrendered to allied forces towards the end of the 2nd World War. The conflict with Japan continued a little longer. For me, listening to the coverage of VE Day building up through this week has been a time of gratitude and celebration but also some sad reflection of our values and goals.

The broadcast media has done a great job putting together recordings and live interviews. It has been fascinating to hear the stories of people who were involved in the war and the eventual victory and celebrations. You get a real sense of the rather unassuming bravery and sacrifice shown by many people in the armed forces and indeed those supporting them at home. People casually described their experience of dangerous missions, being bombed, shot at, and of friends and colleagues falling around them. Most of us living now have not had such proximity to death as an everyday experience. The Covid-19 crisis has some parallels in the potential scale of fatalities predicted but not the same national sense of peril and the need for outstanding resilience.

I am so grateful for those people who put their lives on the line to fight the enemy of that time. Some did not survive. Some were left damaged mentally and physically. They gave their lives so we could live in freedom. And on VE Day there was opportunity to remember and to celebrate.

Because of the lockdown many streets had front garden tea parties and it was good to chat with neighbours in a way that was strangely reminiscent of the community spirit of that time.

And yet at the same time the remembrance and the whole celebration seemed to be almost completely godless. I am sure there were God-fearing people around then and now who could bring God into their thanksgiving and celebration, who saw it as an answer to prayer. But I didn’t hear those voices.

All those grand old gentlemen and ladies articulated the triumph of human achievement, community spirit, and a great deal of good fortune. God was not necessary for the explanation of any of it – the victory, or even the fact of the war in the first place.

Even the prominent Christian voices today seemed to be chanting the humanist mantra of reconciliation and building a better, fairer world. Perhaps that was because church gatherings were banned. Perhaps because they had nothing distinctive to say.

It seems to me that in a way the end of the war marked the beginning of the new era of self-confident, individualistic materialism. Horrifying as the war had been, victory, even with post-war challenges encouraged many of the Western nations to rebuild society where God was relegated to elder statesman. The pursuit of freedom wealth and pleasure was the new religion.

We are facing a deadly virus right now. God help us not to think we can defeat it merely by plucky individuals working for a common cause.  Let us realise that the Sovereign Lord allows these trials to come so we might ask the big questions and get the big answers and turn in repentance and faith.

As we contemplate our own mortality we realise that Covid-19 is one of many causes of death that we cannot ultimately defeat. But when we look to the Cross of Calvary, we really see the ultimate self-sacrifice leading to the most worthwhile victory which was complete, lasting and bringing glory not to man, but to God.

Let us give thanks for good people who served our country. But let’s really celebrate the ultimate hero.