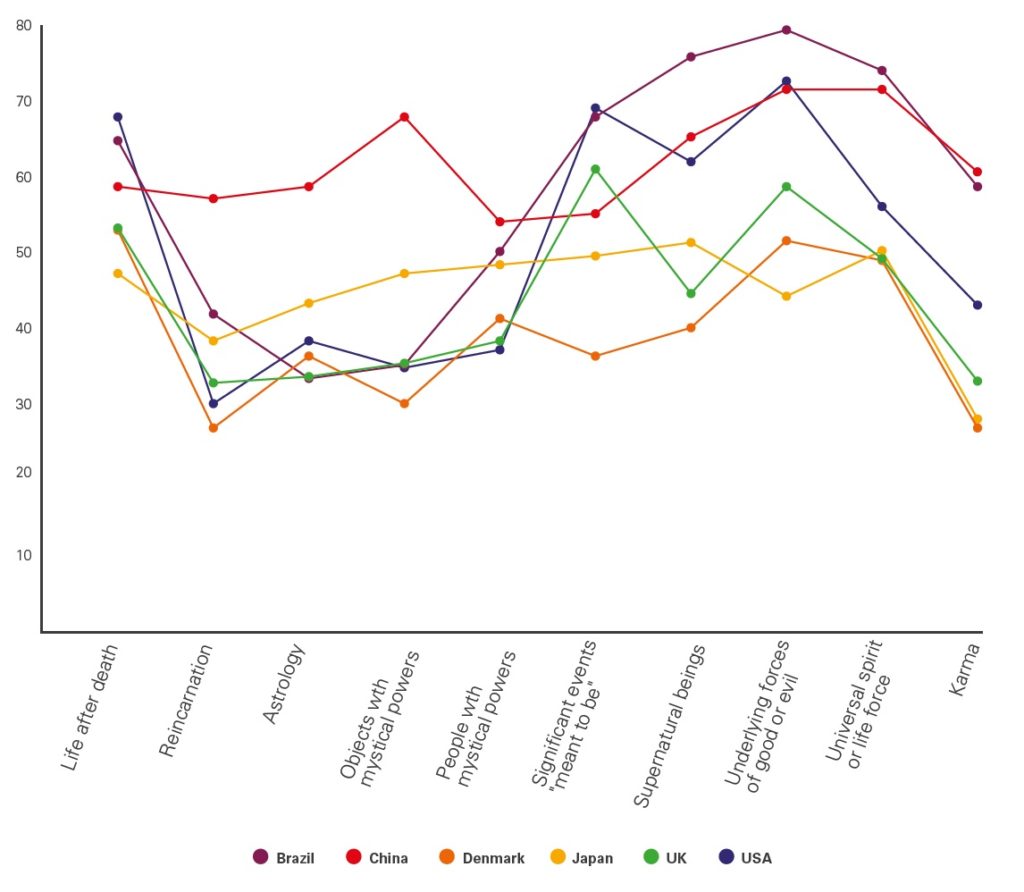 A recent survey by Kent University entitled Understanding Unbelief has been looking into what everyone, but especially unbelievers, actually believe.

The study took place across six countries (Brazil, China, Denmark, Japan, the United Kingdom and the United States), to try and understand the diverse nature of what is referred to as “unbelief”.

It is worth reading in full but one of the main conclusions is that there is a shared desire for morality and a widespread sense of a higher power, even amongst non-religious people.

Some of its findings include:

Almost a third of atheists and half of agnostics questioned believe in underlying “forces of good and evil”, and “life after death” with many believing some events were “meant to be”; half believed in astrology, even though they did not believe in the existence of God. What this suggests is that there are very few thoroughgoing naturalists who think that the material world is all there is. But most do not want to inquire further into the world of supernatural forces or beings.

About a quarter of the general population surveyed believe the universe is meaningless. The response from atheists is higher but even so, about two thirds of atheists and agnostics and three quarters of the population in general do believe there is some meaning to be found in life. Perhaps that is why this group say that they support the proposition that all human beings are born with dignity and a special set of rights. Where these rights come from for the unbeliever is unclear.

But for most that meaning is to be found existentially – in family, freedom and friendship – but only occasionally in God. About half those surveyed thought it was up to each person to decide what is right or wrong.

As people seek to piece together an understanding of life from the shattered fragments of our broken world, there are bound to be logical and moral contradictions all over the place, as witnessed by the results of this survey. But for Christians there are some useful lessons to reflect upon:

It confirms what the Bible tells us: that eternity, an awareness of a higher power (a transcendent God) and a sense of right and wrong are in-built and inescapable, and we have to make great efforts if we wish to suppress them (Ecclesiastes 3:11; Romans 1:20 and 2:15). There are no convincing arguments for the truth of religion or morality based on biological advantage so this innate sense of God is surely because he is actually there and has placed that desire in us.

Also, we observe that people are truly looking for some meaning to life. They might be searching in the wrong places – within themselves or to family, job satisfaction or self-indulgence – but they are nevertheless looking for it.

Yes, there may be many logical inconsistencies in the way people construct their worldview. But most of us are just getting on with our lives and not really considering the influence upon us of a relatively small number of philosophers and others who, unbeknown to us, shape our values. So we have no cause to arrogantly criticise but rather, with love, humility, boldness and confidence, we need to show people that the way to the meaning and purpose that they desire is to be found by connecting with the God they somehow know is there and who will teach them how to live if they will listen.

We can point them to a personal God, more real than blind forces or nature. We can show to those who fear that life is meaningless that there is hope and purpose when we follow Jesus.

We can tell those who have a sense of right and wrong that this awareness comes from God, and that although we do not always do the right thing and need his forgiveness, that God has provided for this. He has sent Jesus so that through his life, death and resurrection we can be forgiven, know what life really means, and discover how to live to please our heavenly Father.