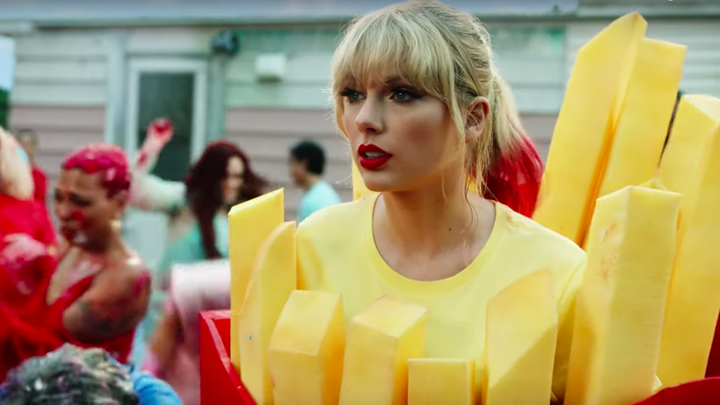 It might not surprise you to hear that I’m a big fan of Taylor Swift… or at least, that I am a fan of her first few albums. As her style has evolved to pure pop, and she herself moved away from the South of the US to New York, it seems her ideology has changed too. I first heard a preview of her new single ‘You Need to Calm Down’ a few days ago; it was catchy and upbeat, and I loved it. But today I watched the music video that goes along with it. Taylor Swift has never been one for subtlety, but this I felt was too much. But it does raise some interesting thoughts.

If you want to view the video, it’s here

The general message is ‘stop being mean’, which is good and right, and not a new message for Taylor. Except that she herself is being quite mean in this video. The political agenda starts with some gay pride flags hanging as bunting. And then some flamboyant characters acting ‘camp’ but then quickly moves onto ridiculing those who believe in the biblical standard of sexuality.

Old-fashioned and frumpy caricatures of Christians are shown holding crude and misspelt signs protesting same-sex marriage and transgenderism. She tells them in her lyrics to “control your urges to scream about all the people you hate”. The irony is that she is being hateful towards that group by stereotyping and ridiculing them. And also that she is actually doing a disfavour to those who are same-sex attracted, who are certainly not all women with short hair and tattoos, or men in rainbow suits, hula hooping and having glittery tea parties.

Now, certainly it is not kind to petition against same-sex marriage by creating cruel plackards and shouting as an angry mob outside somebody’s wedding, but I don’t think any of us are tempted to do that. However, clearly Taylor Swift thinks that shouting abuse at practising homosexuals is the main hobby for many Christians.

Or does she? Back in her very early career, she wrote a song ‘Christmas Must be Something More’, which includes the lyric, “here’s to the birthday boy who saved our lives” – clearly talking about the saving power of Jesus! So how does somebody go from writing very pro-Christian lyrics, to writing very hateful lyrics about Christians? Is it that she feels deeply hurt by the number of Bible-believers shouting abuse at her friends? Maybe, but I doubt it. It’s interesting that this train of thought has followed her move away from her home, her family, and her roots.

Has she just become swept away with the culture? Is she just writing what she thinks will be popular? At the end of the video there is a plea to sign a petition for sexual equality in America. Is this an issue she cares deeply about, or is it a publicity stunt to gain popularity with a particular group? It pains me to be so sceptical about somebody who loves glitter as much as I do, but has Taylor Swift sold out?

And if so, what does that show us? I think there is the warning to us that nobody is immune to being swept up with the world around us. It’s interesting that Taylor’s songs started quite pure, about fairytale romances, and dreaming of one day getting married, and slowly became less wholesome, until they’ve become what I’ve viewed today. In our own lives, the loss of purity is gradual, so let’s be on our guard. What starts as something small can easily lead to something bigger, so let’s set our standards high.

It’s fascinating to me that we seem to have witnessed in the 12 or so years of Taylor Swift’s music career is a picture of what has happened in pop culture as a whole over the last 60 years. Which is not to say that we should avoid all media at all costs in order to keep ourselves pure. No, we need to be seeing what’s out there so that we engage with it. No, that doesn’t mean it’s OK to watch Love Island, but that it’s good to know what Love Island is, so that we can talk to our friends about it. Let’s be using these things as a mirror to the culture around us, and as ways of sharing the gospel.

How can we do that? Ask your friends what they watched/listened to last night. Ask what they thought of it. Why they thought that. Then say, “oh, that’s interesting because the Bible says…” Pray for opportunities. Be bold. Show the world that we are thoughtful and loving. Disagree with people well. Reach out to them, hold out the truth and hope of the gospel to them. And don’t go making placards, especially not misspelled ones.