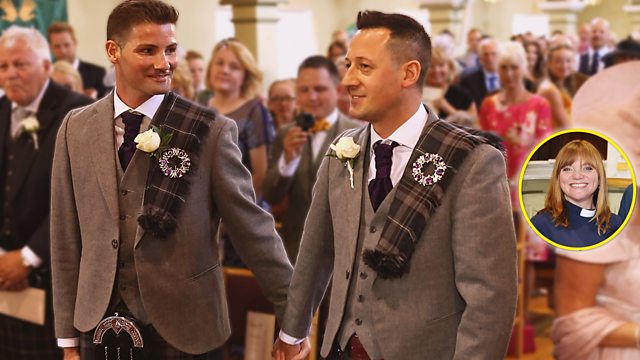 Songs of Praise, the flagship BBC Christian hymns programme has, for the first time in its history, featured a same-sex wedding in a recent episode. The programme included highlights and interviews from the ceremony for Jamie Wallace and Ian McDowall at the Rutherglen United Reformed Church (URC) in Glasgow.

David Pickering, the moderator of the Scottish URC, is quoted as saying:

“The United Reformed Church of Scotland is open and welcome to all, regardless of their sexuality, gender or race… There have been some who oppose same-sex marriage, and they give traditional biblical values as their reason.

For me, of course, it’s possible to look at some individual texts but looking at the broad sweep of the Bible, the traditional biblical values that I find are love, acceptance and welcome, not least for the ostracised – and justice, especially for the marginalised, and hospitality. I think those traditional biblical values were visibly celebrated in the service of marriage between Jamie and Ian at Rutherglen URC which I’m so glad that BBC Songs of Praise filmed and broadcast.”

We respect the right of the BBC to broadcast what they believe is representative of Christianity, and it is certainly true that some churches across the UK, including the URC, have reached a policy decision to perform “Christian” same-sex weddings.

My issue is not really with the programme itself, as I am not sure that Songs of Praise has ever really had its roots in evangelical Christianity. As Peter Hitchins says,

“I doubt anyone was surprised when Songs of Praise featured a same-sex wedding last week. Like lesbian kisses, same-sex weddings are now more or less compulsory in all radio and TV programmes, and I fully expect to encounter one, or both together, in the early morning Shipping Forecast any day now.”

He goes on to say that he is “annoyed by its continuing pretence that it is brave, original and radical, when in fact it is now the safe, boring, conventional wisdom.” He believes it would be far more radical for the BBC to interview Christians who oppose abortion or who support of lifelong Christian marriage.

However, my concern was not so much with the programme itself but that this ceremony was portrayed by the producers – and certainly the participants – as “progressive” in contrast to those Christians who think differently. The strong implication given was that Christians who believe gay sex and gay marriage are wrong are backward and bigoted; in other words, to take seriously the Bible’s teaching on sex and marriage is not loving, welcoming, just or inclusive.

We uphold the biblical teaching that all sex outside the covenant of marriage between a man and woman is wrong, but this does not mean that Christians are therefore exclusive, unfair or unloving. We desire to practise love in a way that takes seriously God’s definition in the Bible of what is loving and good. There can be no true justice without biblical law which determines for us what is right and wrong.

However we must and we do accept all people. We welcome, include, love and seek justice for everyone, regardless of how they choose to live their lives and whether we agree with their sexual ethics or not. But those denominations that celebrate same-sex marriage are abandoning the authority of scripture. Sadly, it is not as though in all other areas of belief and practice they are in line with biblical teaching and in this one area alone they happen to think differently. Rather, in most cases, this represents for them a further move along a path they have travelled for some time, away from biblical Christianity and towards a kind of religiosity which says, “We don’t want to define our terms; we will just say that love, justice and inclusivity are good. This means that we will validate any person’s moral choice or lifestyle. It’s really up to us where we draw the lines, rather than up to God.”

This cannot be presented as biblical Christianity, because it is not. It is a consumer-led, culturally-shaped form of the faith with just the label to suggest it might have some relationship with Christ and the Bible. In the end such twisting of what Christianity looks like is not only wrong but ultimately unattractive and doomed to fail – the desperate attempt of some churches to compete for audience share with various other social networks.

Having stated all this, it must also be said that evangelical Christians need to be so careful not to be defined simply by what we are against. We must beware the danger that our words of truth might be heard as words of rejection. Those who have experienced the grace of God must be at the forefront of welcoming and standing up for the marginalised and rejected. We have to work hard not to be mis-heard. We can end up simply stating our views on same sex-marriage but then ignoring the hurts of the people in front of us.

Same-sex marriage is an area in which the battle for the authority of Christ and his word is being fought. We have to recognise that it is now legal in most parts of the UK and that people will not agree with our view unless they come under the authority of the loving, just and inclusive Jesus Christ – and that is what we must work tirelessly to achieve. But we may sometimes end up talking so much about this one issue (important as it is) that we omit the many other gospel words we really want to say to our society.