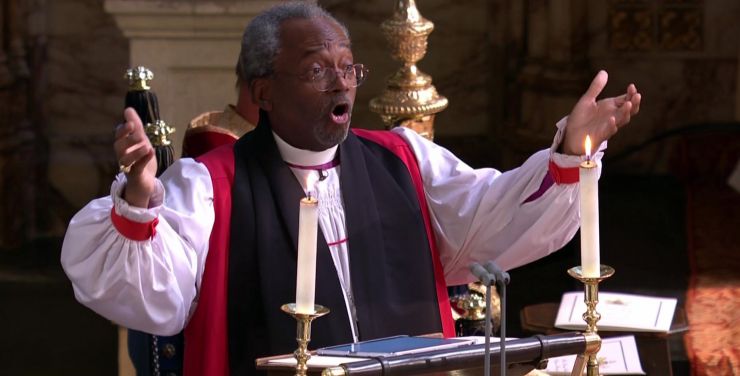 Two billion people watched the Royal Wedding on 19 May and heard a passionate, eloquent and likeable man talk about God as the source of life and love, and tell us that if only we all could love each other more, the world would be a better place. True that. But will it save anyone?

Bishop Michael Curry’s wedding address in the marriage service of Prince Harry to Meghan Markle has fast become the most talked-about homily in the history of preaching. At least it was for a few days.

Most people had never heard of Michael Curry but the general direction of the churches he leads is away from orthodox Christianity and so inevitably we will interpret the sermon in the light of that. I think we can safely say that this was an unsurprising sermon (given the speaker) which placed our hope in the power of a shapeless love to solve all the problems of the world; it gave the false impression that we can save ourselves by somehow tapping into God’s love – that human love will bring heaven on earth. Was the sermon merely incomplete or wilfully heretical – only God knows his heart.

Given the global audience, wouldn’t it have been much better to cut out all the stuff about fire and car engines (as a metaphor for the power of love) and give a few moments to explain that true love is shaped by God’s Word; it is not just a “force”. That yes, love comes from God and can transform society, but only as we repent as we see Jesus Christ on the cross with outstretched arms, loving us despite our sin and making it possible for us to truly love as we follow him in obedience. Christ died precisely because of our failure to love obediently. We love ourselves too much and so we need saving before we can even begin to love as he loves. And when we truly love we are not just following his pattern but obeying his commands.

Nothing of substance was said about Jesus the Saviour and Lord, and for that we must grieve.

A week on and the sermon is not being talked about so much. Maybe, as a result of having heard it, a few people might be more inclined to accept an invitation to a church event, for which we can be thankful to God. Beyond that I don’t think the impact will be felt for long. But what is says about the state of evangelical unity is significant. The short address has created a firestorm on the internet amongst Christians.

We also had the spectacle of Justin Welby, apparently an evangelical, standing rather awkwardly with the American bishop (with whom he is technically out of fellowship!) claiming this was “raw God” (whatever that means) whose sermon “blew the place apart” (presumably meaning he kept everyone awake). It was a fitting symbol of the confusion as to what exactly the gospel is and what constitutes heresy.

Perhaps even worse than the debate about the content of the sermon is the idea that a preacher who is clearly leading his church away from scripture should be celebrated. It is as though we are so desperate for credibility that we will sacrifice anything for the world to think Christianity is “cool”.

All this says a lot about the breadth of understanding and priorities in “evangelicalism.” This is not a call to continue criticising and labelling brothers and sisters who are not in our “tribe” as liberal or shallow, but we can and must humbly point out false teaching and bad fruit where we see it and call on the church to unite around the gospel of salvation as revealed in the Bible, not from our own ideas.

At the same time, we need to aspire to the bishop’s passionate eloquence as we preach the true gospel of love to sinners and feel the confidence that as we do God will save people – whether or not we are speaking to a royal household and a global audience.

Graham Nicholls was interviewed on UCB Radio about this topic