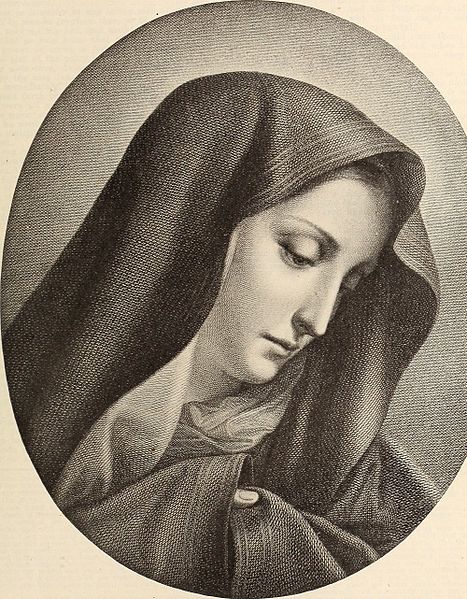 There’s this teenage girl. Lives with her parents.

Like every Jewish girl she prayed that she might be the one to give birth to the Messiah but she never expected it to happen, and especially not the way it did.

An angel comes to visit. Looked like a regular guy, so she’s not startled by the appearance. But she is freaked out by the words – “favoured one… the Lord is with you… don’t be afraid but… you are going to be give birth to a son called Jesus, the Saviour, the son of God, king forever…” and all that without being married without sleeping with a guy, without medical intervention, “you, yes you will give birth to the Messiah.”

She’s bewildered… but she believes it. Takes a trip to see her older relative Elizabeth, who’s got her own surprising conception. Elizabeth believes it too. The teenager sings a song about how God is turning the world on its head – it’s certainly happening to her world.

She hangs around with Elizabeth for three months. Maybe she needs to get away from her family and from her fiancé, to really figure out what’s going on. Maybe she wants to be sure, perhaps it was a dream.

But then she feels the kick inside.

And the kicks carry on. And her stomach swells. She’s pregnant.

Her fiancée, to everyone’s amazement takes her as his wife and he’s going to adopt the son as if it was his own. Scandal or what?

And just when she is almost reached her due date the Romans summon the young couple to Bethlehem. Something to do with taxes. She’d rather have given birth at home but you can’t tell a baby to wait so she gives birth and the baby is put in an animal feeding trough in Bethlehem because there were certainly no labour wards and they couldn’t find any bedrooms to stay in.

They’re still there, baby in the manger, and all these shepherd come rushing in. They’re tough outdoor guys. Used to being alone a lot. Don’t normally make a fuss about babies but they’re here saying all kinds of things about this baby – he’s the Saviour, he’s the King, he’s God. This is good news for the whole world. That was such a special moment. One she would remember forever.

The baby is now 40 days into his life on earth and his mother takes him to Jerusalem present him at temple. There’s an older man and woman there and it’s like they see this baby and just want to say God, our lives are complete, we can die in peace now. The Saviour has come he’s going to change history. They also say the young mum it’s going to hard for you. Painful. Not just parent painful, something deeper, harder to bear.

And then some time bit later these foreign guys with strange names and speaking a different language turn up. They studied the stars. Had them all mapped out. A new star had appeared and for some reason they worked out it meant a new king in Israel had been born. And with a bit of a detour they end up in Bethlehem – in the presence of mother and baby. They worship. They bow down, not to the mother but to the baby. And there’s gifts fit for a king. Stuff they’d never seen or owned or smelt.

12 years later the boy is like any other 12 year old learning from his parents. They make one of their regular trips to the capital, Jerusalem and they somehow lose him, eventually find him talking with religious leaders in the temple. Listening to them but also asking questions. You know what it like when someone asks a question realise how much you need to know to even be able to ask that question. How could Jesus, the 12 year old know so much?

The boy develops in to a man. Knowledgeable but not pretentious. Skilful but not boastful. Devoted to God but not in a pompous religious way. Authentic. Someone you wanted to be with.

And it’s now about 18 years later. There’s a wedding. Jesus is there. Things are going ok but the wine runs out. Socially awkward, well downright embarrassing really. So she asks her son. I guess she always knew he could do miracles. And he does. Amazing wine. Best wine ever tasted. He does so many things like that over the next few years
Now it’s three years on and there’s no wedding and no wine. She’s watching an execution. Her own son, Jesus. The Son of God. The Messiah. When she saw that old man in the temple he said a sword would pierce her soul. Now it’s piercing. Her son is dying before her very eyes. He speaks her – “mother, John, one of my followers will take care of you.” The he cries out “It is finished.” The son of God says his work is done. The Saviour says it’s over. And he stops breathing.

John does take care of her. Gives her a home. She joins up with the disciples.
Jesus the same one, her son who dies, appeared alive to many of them, and I’m pretty sure she saw him too.
She’s part of the group of disciples and of course she tells her story. To all of them but especially to John, to Luke, to Matthew. All the details. She remembers it so well. Every event made such an impression on her. And they write it down for us

Her Story, part of THE Story

Her name? You know it of course, she’s Mary.
She never would have expected people to think anything much of her. She realised her story was just a part of a bigger story – His story.
The story of Jesus who really was God’s promised king and Saviour.
There are many evidences for the existence of God but the greatest one is presence of Jesus here on earth seen by many, including Mary
God with us connected with all that it is to be human. Jesus grew up to be the person you never will be. He didn’t master every skill but in one area, the one exam no-one can afford to fail – do I really love God exam. He passed. 100%.

It connects to your story because he dies in your place. It connects to your future as Jesus rises appears to the disciples and returns to heaven. He offers people a real relationship with God and calls people to follow him. So it could be your story because we’re the people Jesus came to save, the people who need forgiveness.
There are many ways we experience the love of God but the greatest evidence of the love of God for you is at the Cross.

Mary saw that love on display.

What will you make of what Mary saw? It turned her world upside down.

What would you do if you saw all that she did?

Perhaps for some of it’s time to say I’ve heard enough. I need Jesus for my Saviour, my king. I want to start following him.