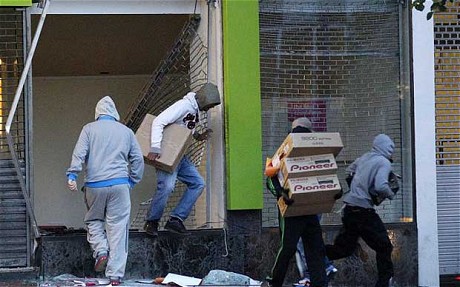 From so many perspectives the rioting that took place in England during this summer raises questions:

Was it connected with racial discrimination?

Was it because of a marginalised underclass who had no fear and no hope?

Was it nothing much really, but the media whipped it up to a story which became self-sustaining?

Was it just boredom, or unrestrained opportunistic criminality?

Whichever of those options are true, why did a large group of (mainly) young people feel the need and the freedom to steal and destroy?

Are we just reaping what we have sown – individualism, consumerism and lack of respect for authority. Being bitten back by the things that our society hails as the new virtues, having deposed God and God’s order.

It may be a minority. It may be exceptional circumstances. But maybe it’s an alarm bell to alert us to the fact that there’s something wrong at the heart of our society, because actually there’s nothing there at the heart, except for our own hearts and our own gods.

Quietly we are all coveting and at times stealing. We are all happy to break the law if we can get away with it. We have little respect for God’s order when it gets in the way of our fulfilment.

We may need better law and order policy. We may need social inclusion strategies. But most of all we need the good news about Jesus that gives people hope and love, so they want to live in the right way.

In addition Click here for a blog article from Mike Ovey which perhaps adds to our thinking about some of the reasons, and a biblical framework

See also this clip from David Cameron. He talks about right and wrong, morality, relativism being a bad thing. Problem is, he doesn’t have a basis for his morality compared to anyone else’s. Without God and His word, what is better about our way of life compared to, say, the “pirate’s code”?