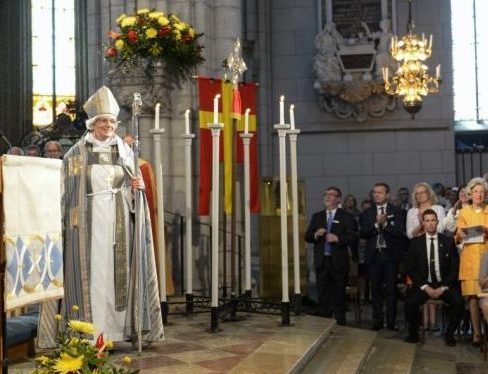 Back in November, the Lutheran Church of Sweden updated its handbook that sets out how services should be conducted in favour of using gender-neutral language when referring to God. It now refrains from using terms like “Lord” and “He” in favour of the less specific, “God”. The Archbishop, Antje Jackelén, is quoted as saying, “Theologically, for instance, we know that God is beyond our gender determinations; God is not human…”

More recently, a church in the Swedish city of Västerås used the gender neutral pronoun ‘hen’ to refer to Jesus in an advert. The church’s dean, Susann Senter, is quoted as saying “The religious Christ is greater [than the historical person] and needs to be described and talked about in each era, with new words and new songs…”

All of which is a tragic misunderstanding of the incarnation we are celebrating over this Christmas season.

We absolutely agree that God is beyond our gender definitions. God the Father is not “human” in that sense. But this move is unlikely to stem from the sudden discovery of a long-neglected theological truth. Rather, I would suspect that it flows from a very anti-theological desire to accommodate the church to a culture of blurring gender distinctions and antagonism towards any form of male headship.

The reason for the retaining the male descriptions for God is not to hold on to some kind of unwarranted patriarchy but to acknowledge that the Bible reveals God to us in male terms, and in the case of the first Person of the Trinity, as Father. Yes, he has motherly attributes too, and he is not constrained by the biological limitations of gender. But God is never given a feminine name, or referred to using feminine pronouns.

It is not that God is like a Father; he is the Father – he defines fatherhood. And he made human fathers and he gives us the example of good fathers so we can understand the kind of secure relationship of love and protection he offers to us.

It is not that God the Son is the biological descendant of God the Father but he does relate to the Father as the perfect Son, and he really was born as a male human being, not a female and certainly not an androgynous android.

So let’s retain and celebrate the rich, descriptive and intentional language of the Bible, that God is “he” and not “it”, rather than trying to accommodate a misguided equality agenda.