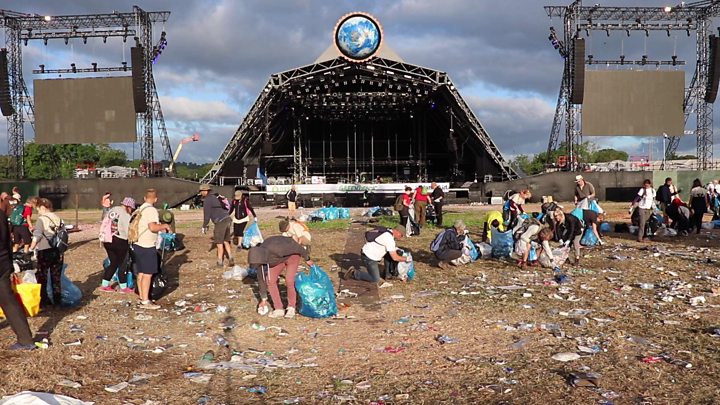 Well, that’s it. Glastonbury is over for another year – and I’ve still not made it there. The annual music festival, in its 49th year, shows no signs of ageing, even though the audience might be. With a site the size of Oxford it is definitely a cultural landmark.

There are many good things to celebrate in this festival: We acknowledge the sheer artistry of the musical talent on show and acknowledge and enjoy their compositions and performances – and we give glory to God for every good thing there. For me, I am also fascinated by the whole organisation and logistics to create all those different stages with so many instruments and sound systems and the broadcasting process, let alone the provision of power and water (and sanitation!). This also is a testimony to the gifts God has given us as humans to rule and subdue, to design and implement.

Without even being there, but just watching the highlights on the BBC, you get drawn into the sense that this is a religious experience for many – a kind of communal worship that connects with something other-worldly. All human beings are worshippers; we want to worship something and it is better doing so with a crowd. As if to underline this, David Attenborough gave a short speech to the assembled thousands. In recent years he has become the high priest of environmentalism, making apocalyptic pronouncements about global catastrophe. Our sins which have led to this disaster must be atoned for by acts of green-friendly tokenism. He pronounced a blessing on the congregation for avoiding plastic, as he spoke from a stage lit by 3,700 light bulbs.

Considering all the energy needed to create this event and for everyone to actually get there, going plastic-free would probably have marginal impact on the planet but I guess the point he made was partly about education. At least the site was easier to clean up and the baby sharks will be happy.

And then there’s Stormzy. Ah, Stormzy – agonisingly close to being a Christian poster boy. “Blinded by your grace” is an almost perfect Christian song about the undeserved mercy of God. Apparently some churches incorporated the video of his performance of this song in their Sunday morning services last weekend. It was so weird to see thousands of people singing along to words about the undeserved mercy of God. But as my children are always telling me when I ask “So what exactly is this song about?”, the words don’t really matter – they are just there as part of the music.

Stormzy talks about God (well, occasionally) and he seems to credit him with being in charge and at least deserving some glory and being an explanation for the mysteries of life. And then he swears some more at everyone and everything and talks about smoking marijuana (I think the phrase is “bun my zoot”). I don’t think he’s pointing us to Christ with any clarity but maybe some of us might be able to get into a spiritual conversation off the back of it.

Hedonism, the unrestrained pursuit of pleasure, has long been the stock-in-trade of the music industry and is the backdrop to these festivals. But each year the boundaries are pushed a little further. One speech reported very favourably by the BBC was from Heloise Letissier of Christine and the Queens. She is one of the artists “pushing the envelope” and says “because if there’s no judgment, then anything can happen”. She spoke better than she knew. If there are no consequences to our actions – if sin will not be judged – why bother being holy, why worry about transgressing a moral code. There might be utilitarian reasons for behaving in certain ways but nothing more than that.

These kind of spectacular events leave me feeling sad; sad that there are not these vast crowds in the UK at present who want to gather to worship Jesus Christ as king. And he deserves so much more praise! Sad, that the misguided morality being preached will not bring ultimate happiness and satisfaction for anyone.

And sad that when the festival goers throw away their plastic tents and the site is deserted again, they go back to their lives fundamentally unchanged. It was probably a great experience but it will not take them into the greatest festival in all of history – the gathering of the church.

Where do I go with my sadness? It can only be to pray for the Lord to cause such a movement of his Spirit that so many lives are transformed by the gospel that they want to worship Jesus. And to work even harder to try and understand this world and its values and speak the message of hope in a way people can understand.