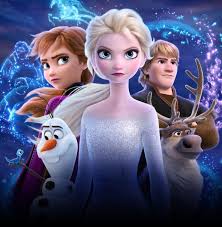 One of the things I love most about Disney films (as well as the super catchy songs) is that they always sneak in a few jokes that only the adults watching will appreciate. A favourite of mine is in Beauty and the Beast when Cogsworth and Lumiere are showing Belle around the castle, Cogsworth is talking about the baroque decor, and says “if it’s not baroque, don’t fix it!” Frozen II, however, seems to have taken this one step further, as the whole plot apparently speaks to millennials and their worldview, with some not-so-subtle hints to lead us to this conclusion as the movie rolls.

Here’s the situation: in the mid-’80s to mid-’90s, a whole generation were raised on Disney films, on princes and princesses, on toys that come to life, on ‘if you can dream it, you can be it’. And now this generation are around 30, we have got all kinds of dreams, and too often we can’t achieve them because of student debts, rising house prices and the mounting costs of childcare. What happens when the Disney generation are becoming parents themselves?

In the first Frozen film, Elsa creates a living snowman named Olaf with her ice magic, and at the end of the film (spoiler alert!) she creates a personal flurry for him, so that he can live indefinitely without melting. For the first time in forever there’s a snowman who is living beyond one winter, and so he seems to have an existential crisis in the second film, asking questions like “Tell me, you’re older, and thus all-knowing, do you ever worry about the notion that nothing is permanent?” But he doesn’t worry about it too much, trusting that it will all make sense when he’s older, even singing a full song to that effect, which includes the lyric “‘cos when you’re older, absolutely everything makes sense!” (cue laughter from parents in the audience).

This is pretty astute of Disney, because this is what, as children, we were led to believe; but in a mid-Brexit world, it is all-too-obvious that this is not true. Olaf is not the only character who is struggling with issues like this – Elsa, too, doesn’t want anything to change, and yet feels compelled to follow the siren call into the unknown, which (surprise, surprise) turns out to be a voyage of self-discovery as she finds out who she really is. Anna happily skips through life, until her sister Elsa (apparently) dies, and then she feels completely lost, singing “how do I rise from the floor if it’s not you I’m rising for?”

And then there’s dear Kristoff, who never seems to catch a break. In the epic ‘90s boy band parody Lost in the Woods, he sings his own song all about not knowing quite who he is or what he’s meant to do. He sings, “who am I if I’m not your guy?” making it clear that each of these characters are defining themselves by somebody else. Elsa’s identity is bound up in who or what gave her her powers, Anna’s is in saving her sister, and Kristoff’s is in being ‘the boyfriend’ in a film that’s all about not needing a man to save you.

And this is where a lot of millennials are at: the Spice Girls taught us about ‘girl power’, Destiny’s Child taught us about independent women, and Disney (back then) taught us to aspire to be princes and princesses. S Club 7 taught us to ‘reach for the stars’, but the government tripled university fees. So that leaves us, like Kristoff, feeling lost in the woods. Identity, or ‘finding yourself’ means much more to millennials, I think, than it did to previous generations, precisely because of things like this. And don’t forget we were all raised on sticker charts, so it was instilled in us to get rewarded for every small thing we achieved, which naturally leads to a lot of disappointment upon reaching adulthood.

As a church, this is the mindset of a lot of those we are seeking to reach, both inside and outside our congregations. We are a confused generation, full of mixed messages and the desire to prove ourselves, without quite knowing how we can do so. More than our parents’ generation, though, I think we are asking questions. Like the Frozen characters, we are looking for answers, but often those presented to us fall far short. Mindfulness, healing crystals, network marketing, yoga, paleo… the list goes on.

But we know that we have the right answers, the ones that truly satisfy! The Bible presents us with a whole worldview that makes sense – it fits with what we see in the world around us, and with our experience of it. And it, too, is rooted in our identity: were were made by God, we walked away from him, God the Son rescued us and now our lives are bound up with him. We are united with Christ, so we know who we are, where we came from, where we are going, and what our purpose is!

That’s not to say we should (or even can) walk around feeling smugly superior that we’ve got it all sussed – not at all! We will still face the same struggles as everybody else, whether its financial difficulties, depression, infidelity, cancer, grief, anxiety, conflict, loneliness… the list could (and sadly does) go on. But we know that these things are to be expected in a broken world, so we shouldn’t be surprised when we face any number of these challenges. But we face them with hope. Secure in Christ, we know we are headed to heaven, where there will be no more crying or death or pain, which gives us the hope to carry on and, to quote Frozen II again, “do the next right thing”.

And we are not alone. Union with Christ is something that aids us in our daily lives, as we face our commute or the pile of washing up. I’ve just finished reading Rankin Wilbourne’s Union with Christ – it is an absolute game-changer for Christian living. Read it. Just do! I won’t attempt to summarise what he says, as I’d do it too poorly, so just go and read it.

I will say, though, that unlike Anna, Elsa and Kristoff, we don’t need to fall apart when life changes, even when facing real tragedies, because our union with Christ never changes. If my identity is in my job and I am made redundant, I will be devastated. If my identity is in who I’m married to, and I’m divorced or bereaved, my life will crumble. But if I know that I am a child of God; saved by Christ, chosen and adopted by the Father, being transformed by the Spirit, I can never really be shaken. Be encouraged, Christian! This is good news, and there is a whole generation of young(ish) adults who are thirsty for it!