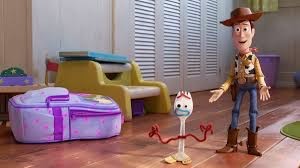 As we walked out of the plush new Everyman Cinema in Horsham having watched the latest Toy Story film, my youngest grandson, aged 5, said “That was the best film ever”.

So, what is Toy Story 4 about? Well to start with there are some new toys introduced including ‘Forky’ who thinks he is ‘trash’ as he was made out of stuff thrown away in a bin. The thing that makes Forky more than just discarded rubbish is that Bonnie has written her name on him, he is her creation on her first traumatic day at nursery. That makes him special, but it takes most of the film for Forky to realise this and stop throwing himself in the bin and attempting suicide from moving vehicles etc. only to be rescued by the ever-attentive Woody.

Another new toy introduced since Toy Story 3 is Gabby Gabby, who says that she was defective from ‘right out of the box’ and who is stuck in a spooky Antiques Shop  longing for fulfilment and to be loved by a little girl Harmony who comes into the shop frequently to see her grandma who runs the shop.

The old favourite Woody, always Andy’s favourite toy, has a struggle to decide between being a second rate toy for Bonny his new owner or escaping for a new life with Bo Peep in the world of opportunity, free from the burden of being ‘owned’ – but what will he choose?

Okay they are just toys, but really the film is about people trying to find out who they are and why they exist. You could say that this movie is about identity. In a changing environment with Andy grown up, the toys need to find their place in the world with Bonny as their new owner. Toys don’t exist for themselves, they find their purpose and meaning only in providing pleasure, comfort and companionship to their owners – or do they? – the end of the film leaves this question open.

The film resonates with many of the struggles and questions people are asking today. Yes, we landed a man on the moon fifty years ago but who are we beyond just a few chemicals and a lot of water? People today are looking for identity, to find meaning for their own existence in a universe that seems vast and amazing – but how can we find our significance on this tiny planet in a far-off corner of the universe?

Jeremy Pierre in his excellent book ‘The Dynamic Heart in Daily Life’ suggests that ‘What people believe about themselves determines the shape of their life.’ He uses Calvin’s introduction to the Institutes to show that knowledge of ourselves and knowledge of God are closely related.

This is the view of ourselves we build up from the world around us. ‘People’s constructed identity is their established self-image, made up of a complex arrangement of various conceptions, values, and commitments about who they are and what role they play in the world.’.

For example, ‘I am a Father, an Arsenal supporter, a librarian, a trombone player’. Constructed identity is developed over time by listening to all the voices around us. People can be very inconsistent in their self-perceptions which are often a jumbled mix of accuracies and inaccuracies. For example, people can have an incredible gifting in their employment say as a surgeon or a businessman and use it to incredible purpose – but they can be blind to their own relational weakness all around them.

Of course the idea of a given identity in today’s world is largely rejected but Pierre suggests that humans do not come like ‘iPhones with their software preloaded’. God revealed to Adam and Eve in the garden who they were and God’s revelation through scripture tells us who we are and what we can become.

So in summary form you could say

–  ‘I am created and therefore both eternally valuable and inescapably dependent.’

–  ‘I am fallen and therefore both bad and broken’

and for the Christian ……

– ‘I am redeemed, and therefore forgiven and loved’

– ‘I am newly created and therefore both cleansed and waiting.’

Given that these days you supposedly transcend even your ‘given’ biological sex, it seems people are more and more confused about who they really are. When teenagers fail to treat their bodies with respect, when people self-harm with alcohol and drugs, when they treat others as mere objects to satisfy their own desires is it because they fail to understand their true identity, their given identity revealed by God?

Caring for people in our society involves addressing how their constructed identity compares to their given identity. Like ‘Forky’ in the film we have to learn that we are not worthless trash – but we have dignity and purpose but only in relation to the God who made us.

G.K. Beale in his book ‘We become what we worship’ says

‘…there is a good self-love that seeks what will truly make us happy; it is loving ourselves by desiring to become wha God wants us to become…. loving God, paradoxically is the best expression of self-love, for in loving God we are truly happy’

So go on love yourself in that way. Yes, hate the sin that clings to you, be revolted by the self-gratifying urges but be positive about who you are in Christ and who you will become one day. (1 John 3:2)

And love the people around you, value them as creatures made in the image of God – constantly repeat the gospel to yourself and others.

Oh and yes I agree with my grandson – the film was awesome! Go and watch it and see how you feel about the bittersweet ending which I won’t spoil for you.